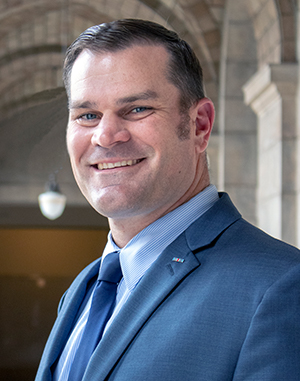 Jason Jackson began working for the State of Nebraska in 2016 as Chief HR Officer (CHRO) for Governor Ricketts and continues to serve in that capacity as well as being DAS’ Director since 2018.

Originally from California, Jason moved to Nebraska because he wanted to experience the “Good Life,” and return to public service. As the Governor’s CHRO, Jason is responsible for driving strategic talent initiatives to enable a more efficient and customer focused state workforce. Prior to joining the Ricketts’ administration, Jason worked in HR in the software industry. Before beginning his HR career, Jason served for five years as a Navy Officer, earning the Navy Achievement Medal and Navy Commendation Medal for his service in the War on Terrorism.

Jason is a graduate of the United States Naval Academy and has earned a Master of Arts in Political Science from San Diego State University and a Juris Doctor from Thomas Jefferson School of Law.